The latest infrastructural developments in some of France’s best resorts

As the 2018/19 ski season picks up pace we investigate the latest infrastructural developments (lifts, pistes & leisure facilities) in some of France’s best resorts.

Two new blue pistes – La Corniche & La Croix d’Antide – in the Val Thorens & Orelle (the fourth valley) supplement the vast network of beginner slopes at this end of the ski area. La Corniche offering a more tranquil route to the lifts that bypasses the crowded centre of Val Thorens. Further good news for the casual skier, is that the Chambre piste that connects Val Thorens, Les Menuires & St. Martin de Belleville to Meribel has been re-routed and is now a pleasant blue run.

On top of that, this season there are three new lifts in the 3 Vallees.

Arguably most significant of the new lifts though is the new Ariondaz 8-person gondola lift in Courchevel 1650 replacing a 6-person gondola of the same name which dates back to 1974. The new lift will carry as many as 2400 people per hour, compared to the 1500 of the previous lift, reducing congestion in this up-and-coming sector.

The run back to the village of Moriond (1650) will benefit from smart new state-of-the art snow cannon – some of the extra 115 that will be installed in the Courchevel ski area for this season – and a new three-kilometre long sled track will open this winter, running from the top of the new Ariondaz gondola.

It’s here. After much anticipation, the Four Seasons Hotel Megève has officially opened its doors in the glorious alpine playground of Megève. As we’ve previously reported, this new property is a partnership between Four Seasons and Edmond de Rothschild Heritage, a lifestyle company owned by Benjamin and Ariane de Rothschild. Historically the de Rothschild family were key figures in creating Mégève as a sought-after luxury ski destination (Noémie de Rothschild first opened the now legendary Domaine du Mont d’Arbois in the 1920s).

The hotel has 55 rooms (including 14 suites), complete with fireplaces and balconies for taking in the mountain views. 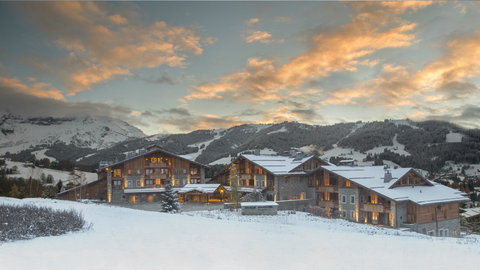 Some of the world’s finest skiing is at your doorstep. This is the only hotel situated directly on the slopes of Mont d’Arbois, with access to more than 277 miles of skiing. There’s an in-house Ski Valet and Ski Concierge, and for adrenaline hounds, the Four Seasons also arranges Helicopter Ski Safaris. Other popular winter activities include sleigh rides, ice fall climbing and curling.

Ozher headline news for the 2019 ski season in Megève is the 34 year-old Chamois gondola from the centre of town up to the slopes has been replaced with a new high-speed gondola with a carrying capacity of 1750 people per hour and a transit time of 4:40 minutes. The l’Épaule du Joly chairlift has been replaced for this winter too, with a high-speed 6 seat chairlift replacing the sluggish two-seater that operated here. This will improve access to the picturesque Grande Epaule run that sythes along the top ridge towards St. Nicolas de Veroce. The relatively new lift company owners – Compagnie du Mont Blanc – have pledged €60 million over the next few years to improve Megève’s skiing infrastructure. So there are plenty more developments in the pipeline.

The revamp of the Solasie area will, after 2-3 years of ongoing improvements, be brought to a conclusion this year with the replacement of the sloth-like Datcha lift with a high-speed chair that will take just 3:10 minutes to deliver its passengers to a range of pleasant blue slopes. This area will also benefit from a new mountain restaurant – L’Etincelle – this winter.

The Santons blue home piste will have snow-making from this year – a welcome alternative to the nerve-jangling Face de Bellevarde.

Long-term this looks a very healthy spot for property investment as, over the next 5 years, the resort aims to entirely redevelop the heart of the village. A new front de neige, two new hotels, a range of premium apartments and a variety of other facilities are in the pipeline in a €200 million project called ‘Le Coin de Val d’Isère’. Watch this space.

Compared with the other big-hitters in France, there has been less activity in the Portes du Soleil with regards to improving the infrastructure.

That said, progress continues to be made to this highly varied and characterful ski region, with a new 6-person chairlift replacing the 4-person lift at Ranfouilly above Les Gets. This increases the carrying capacity in this sector to 3300 people per hour, offering reduced queues in this scenic bowl of blues and reds.

Since 2012 La Clusaz has been carrying out a major renovation programme with consistent renovations and additions to the ski infrastructure over the last few years. This year sees the 3-person Crêt du Merle chairlift of 1974 replaced by a 6-person chairlift with a carrying capacity of 2100 people per hour (compared with 1500 people per hour on the 1974 vintage). The 7 minute transit time has been cut by almost half too, so queues will be significantly shorter in this area and time to slopes reduced.

One of – if not the – main route up to the slopes from the centre of La Clusaz, this upgraded lift will improve the skier experience in the area significantly for the near total majority of visitors who use this lift on a daily basis.

The base station for this lift will be revamped with reduced mobility access to the slopes, ski lockers, a new ticket office and the Sports Club will be accommodated here too.

More than €350 million will be spent in the Alpe d’Huez region over the next 5 years, including a new gondola link woth Les Deux Alpes (2021).

This season an 8-person high-speed gondola replaces the antiquated Vaujany-Enversin lift increasing the carrying capacity from 600 people per hour to 2,000 between the La Fare piste and the centre of Vaujany.

This year there are two new “fun runs”, an expansion to the snowpark and a new “Alpine Coaster”, bolstering the resort’s child-friendly credentials, while 68 high performance snowmakers have been added in the Signal, Les Jeux and Bergers sectors.

For 2017/18 the Pré Saint Esprit lift, which runs from below Arc 1950 and Arc 2000 up to 2294m and a network of blue pistes with great snow, has been upgraded and extended. Replacing a 3-person chairlift, this new six-seater is the longest in France at 2.85km and operates at half the transit time of its predecessor while carrying twice as many people per hour.

A snowmaking factory has been built into the lift building too, increasing the snowmaking capacity of the entire resort by 50%. The Vallée des Arcs blue runs served by this lift have been remodelled, increasing the piste width and taming the gradient, so this will become a new haven for beginners and early intermediate skiers.